Charles Keeping & The God Beneath the Sea 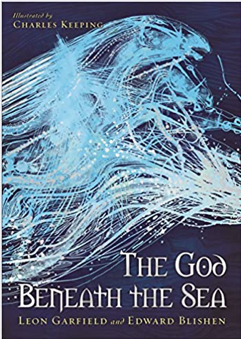 Charles Keeping, described as ‘one of the most influential of modern British book illustrators’, and a Londoner has been wrongly left behind. By organising the first one-man exhibition of his work, Heath Robinson Museum decided to give his work justice.

The God Beneath the Sea (1970) written by Leon Garfield and illustrated by Charles Keeping does more than providing a simplistic representation of a story. Charles Keeping’s illustrations create an ‘evocative mood’. Like a writer who carefully chooses his words, Charles Keeping himself does not produce drawings in a mechanical manner. On the contrary, his illustrations are made essential to the story, adding an ‘extra dimension’ to the text.

Reflecting on the art of combining text and illustration, my mind made a parallel with earlier artworks. One of them is titled Prose du Transsibérien et de la petite Jehanne de France (1913) where the poetry of Blaise Cendrars is magnified by the brush of Sonia Delaunay[i]. I don’t know if Charles Keeping was aware of such attempts in the world of poetry, but he was definitely an innovative trigger in the world of book illustrations. We can experience the personality emanating from the drawing and its superb combination with the text when contemplating the ascent of the chariot from under the Sea:

“Grim Hades harnessed his four black horses to leave the sullen underworld; and Poseidon the earth-shaker mounted his golden chariot under the ocean and sent the sea-creatures scudding from his path. The sea-forests bent and swirled away before his coming, and the conch-shell at the entrance to the grotto of Thetis and Eurynome blared out the waters like a trumpet.”[ii]

It is no surprise that an author who retells antique mythology has found a fruitful collaborator in Charles Keeping. Mythology contains many layers of understanding when read by young or mature minds. However, to all, mythology conveys a sense of dream and adventure. It drags the reader in the heart of the story and stimulates their imagination. One of Charles Keeping’s fans, Nick Brown, expressed beautifully how stunned he was by the sight of his illustrations: “I would take them out every so often and admire their power and violent beauty”[iii].

This particular illustration is memorable for its movement and energy. The technicality of the drawing serves the representation of strength, divinity, enchantment and refinement – a similar technique is to be found in other of his works, such as He began to dance[iv]. The black and white version with its nervous and precise pencil strokes appears as efficient as the coloured cover of the book’s edition: the movement is irresistible and quasi hypnotic. The magnificence of the horses engulfs everything standing in their way, like a wave.

Horses are a recurrent theme in Charles Keeping’s illustrations.  They can embody either strength or warmth, wildness or childhood, always in a finely-tuned way. Never limited by the subject he illustrates, he succeeds in pouring rich emotions out from illustrations of animals, people and even buildings!

[i] Sonia Delaunay uses a technic called “simultaneism” where colours are associated in abstract forms and convey intensity and vibrance.
[ii] The God beneath the Sea, Chapter 6.
[iii] http://sevenstoriescollection.blogspot.com/2014/11/charles-keepings-illustrations-for-god.html
[iv] Illustration from Wizards and Wampum (1972) by Roger Squire.
[v] Detail of Hades Chariot from The God Beneath the Sea. Image © Charles Keeping estate