In Conversation with Daphne

To “know your material” is the longest lasting advice Daphne received during her apprenticeship. 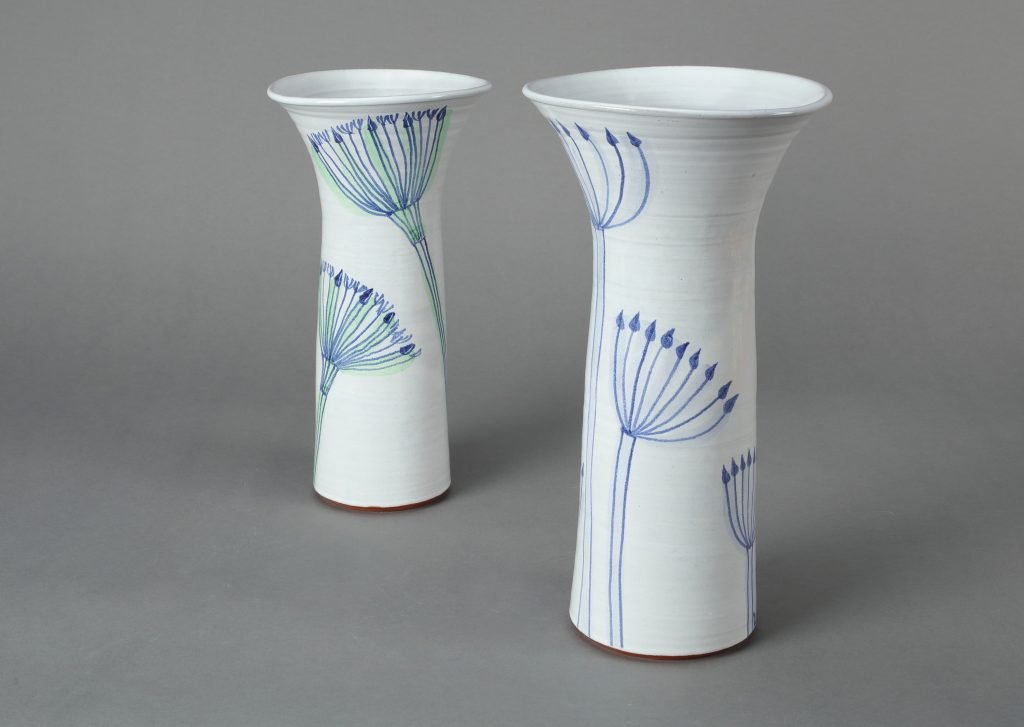 I discovered Daphne Carnegy for the first time when I was watching her masterclass online[i]. She stood in her studio surrounded by platters, dishes, and jugs with feminine shapes. Distinctive round and flat neck vases stood behind her, all united by the impression of light and elegance they produce. When I set up an interview, the richness of our conversation did not disappoint me.

Daphne is a professional potter based in Kilburn. She taught ceramics at City and Islington College and glaze technology at University of Westminster. An expert in her field, one of the first things I learn is that she has written two books on tin-glazed earthenware (the generic term for maiolica)

Her discovery of pottery goes back to when she was working in a London publishing business. The evening classes Daphne took in pottery incidentally proved to have been the beginning of an exhilarating journey.

The journey of an apprentice

Daphne started by becoming an assistant to a potter in the town of Aix-en-Provence, France – the region of lavender, olive oil, shimmering pastel hues, and Van Gogh. This was then followed by a year spent as an apprentice to Jean Paul Betton in the Maconnais, and a further training with Jean Luc Demolliens and Gilles Duru.

After her pottery ‘tour de France’, Daphne felt the desire for more formal and in-depth art training. She came back to England and studied for two years at the excellent Ceramics Department in the Harrow School of Art. She tells me of a historical project whereby she was required to reproduce a ceramic piece of her choice from Victoria and Albert Museum – a 16th century Faenza maiolica albarello.

After her studies, she opened her own workshop in Kilburn in a studio together with other production potters. The opportunities in a new market were numerous, as tin-glaze was quite a rare practice back then, stoneware being the predominant medium of potters at the time.

To “know your material” is the longest lasting advice Daphne received during her apprenticeship. Whenever she speaks about clay material, I can imagine its smell and touch. It seems to be a very special material to work with: flexible with endless possibilities, metamorphosing during the making process and can be worked with at different states depending on the technique. It’s all about doing something at the right moment. But, with a bright laugh, Daphne also tells me that clay is not very forgiving. Endless things can go wrong!

The tin-glaze used to cover the pottery is another tricky element. Daphne reveals to me it is still a challenging skill. She mixes her own glaze[ii] a day ahead to let it settle and to test the thickness of the white milky liquid. If the glaze is too thick, it ‘crawls’ but if it is too thin, the body of the clay is still visible. The ideal thickness of the tin-glaze is that of a kid glove. The glaze also goes through metamorphosis with the reaction of the applied pigments in the firing. Her current palette is mostly shades of cobalt blue. The pigments vary in intensity and texture as they fuse and shift with the glaze.

Daphne’s knowledge of her materials can be quantified in the “layers of time” spent in preparing the clay, throwing, turning, glazing, painting, and firing. She describes her learning as a gradual process. Her chosen technique is tin-glazed earthenware which is characterised by a specific softness and luminosity – it originated found in ninth century middle east and then spread throughout Europe, where it became likened to ‘treasure’ because of its rich colours – in stark contrast to the brown medieval ware.

Let’s open the door of Daphne’s studio to have a glimpse upon the fastidious, though rewarding making of maiolica.

The initial stage consists in preparing the clay by using a pugmill[iii] and then cutting it into sausages. With circular movements Daphne kneads the semi-prepared clay, ready for throwing. Throwing is a magical moment where clay takes its shape. Daphne explains that it is the pressure of the fingers, the rotation, and the speed of the potter’s wheel that determines the result. She would do one type of pottery at a time – either all jugs, mugs, or dishes. The next day, the leather-hard (or cheddar cheese) consistency of the earthenware allows Daphne to assemble handles or make a spout. During summer, the clay dries more quickly and the work must be covered to ensure slow and even drying.

The pieces have to be bone dry before going into the “biscuit-firing” at 1000 degrees Celsius. A slow firing rate will allow the moisture to be driven off gradually. The bases of the biscuit- fired pieces are then are then waxed in order to resist the glaze.  Daphne tells me, the contraption used to prepare the wax is very ‘heathrobinson’ with its cylinder and light bulb. With tongs, the pottery is then quickly dipped into the bucket of glaze, starting with the small pieces of pottery first. Gradually she adds water to the glaze to modulate its thickness for bigger pieces.

The painting stage never takes place on the same day, as moisture needs to come out and the glaze needs to harden-up. She tries to paint the similar types of pottery to keep the same theme. At an early stage of her practice, she tended to make more structured decorations which became freer over time. On the pots she paints today, the brush strokes of inky cobalt blue are enhanced by the milky white tin glaze. She developed this colour palette a project for London Craft Week some years ago. More recently, she has started painting a series of medieval birds as an interpretation of some depicted in Norman stained glass.

After decorating, the pottery goes back into the kiln for the glaze firing at 1080 degrees. A long soak lasting one hour and fifteen minutes at a high-temperature is beneficial to improve the aspect of the glaze. In addition, pottery made to hold water, such as jugs and vases, need to undergo a second “glaze-firing” of the base at a lower temperature.

I must confess the awe I experienced at the sight of Daphne’s clean and mostly poetic earthenware. The numerous creations reflect nature, with their tin-glaze and leafy patterns. Together, they form an unexpected conservatory of senses, where one could almost distinguish the smell of freshly cut grass or feel the warmth of bare feet on the sand. As she throws a new ball of raw clay on the wheel, I close my eyes and enjoy the dawn of a promising spring ahead of us.

[ii] The glaze is made of frit (neutral base), tin and pacifiers as tin oxide and zirconium. It can be kept without changing its qualities as it is insoluble.

[iii] A pugmill is a machine used for mixing materials as clay and preparing it.